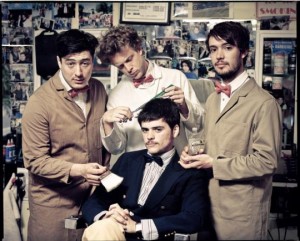 Although they are often labeled as indie rock and folk, Mumford & Sons’ undeniable success suggests they are on their way to becoming a major label. In just four short years, they have achieved what all musicians dream of: Since debuting in the UK in 2009, Mumford & Sons reached number two on the UK Album Chart. Similarly, Mumford & Sons has reached number two on the Billboard 200 since debuting in the US in February 2010. Just this week, their album Sigh No More was number six on iTunes.

So who is Mumford & Sons?

Mumford & Sons is a folk band from London. They spontaneously came together in 2007. Each member had been playing various instruments independently prior to meeting. After an impromptu performance, the band bonded over their love for music and their desire to create unique, powerful melodies. The band began rehearsing in the fall of 2007 and was touring extensively by 2008. Since their debut, Mumford & Sons have been blessed with sold out performances and chart-hitting singles and album.

Who makes up Mumford & Sons?

Despite the unique instruments and confident, folk sound, Mumford & Sons plays music that all people can relate to. They sing about love, heartbreak, and fear. Their lyrics are poetic and romantic, and their melodies are moving and inspiring. Mumford & Sons sing about the same topics as every other artists, but their soul and sound is unlike anything you’ve ever heard before.